In the first Will Diaz book titled The Cross and the Badge we read about a frightening homicide and takedown on Christmas Eve. The incident is actually two stories put together, one concerning the homicide, and the other the takedown, both of which have a basis in truth.

In the story, Will and RJ are making some money by assisting a smaller department with their law enforcement activities on a cold, snowy Christmas Eve. But it’s a long ways from being a Hallmark Christmas. The bars in town are wall to wall people, and all the police officers know they’re sitting on a powder keg.

It explodes in a way no one expects. In the middle of a bar that has over three hundred people in it, all of them partying and dancing, a man stands up and shoots his wife in the head. Will’s wife witnesses the entire incident and later relates she couldn’t believe it was actually happening.

The suspect runs out the back door of the the establishment. Will and RJ hear the shot and were moving to investigate when the man comes out and engages the two deputies. Will and RJ are reluctant to return fire because there are people in the alley, and when the guy runs, the pursue him. The guy runs down an alley and upstairs to a room in a fleabag hotel. Here’s a sketch of the area of our tactical area:

Will and RJ follow. and taking a position down the hall, are able to effectively bottle up the suspect.

That they have to go in after the guy is a given. So begins the planning for the assault.

The first thing Will has to look at is the situation. We have a man who has killed his wife in a room full of people. He ran, and fired upon police. Now he’s bottled up. By Will’s estimation, he’s low on ammo, but probably has access to at least a basic reload in the room where he holed up.

Will and RJ are able to learn the man’s name and that he speaks very little English. Fortunately, RJ speaks Spanish fluently.

The situation pretty well defines the mission. The Mission is simple, apprehend the man. Will hopes to do this by either talking the man out, or going in after him.

Execution is the last item on the list. Problem is, Execution requires a lot more than two deputies to do this safely.

The Plan: Containment is high on Will’s list. He doesn’t want the guy to get away now that they have him bottled up. They’re on the second story of a building and the guy has access to a window. Jumping out and landing safely is well with the abilities of most people.

This is where reserves is a really handy thing to have. Several people who assist are either former police, military, or local emergency responders such as fire and EMS.

Will has a couple of firetrucks placed in the alley behind the hotel. They have large spotlights, and he has the fire captain focus the spotlights into the window of the room where the suspect is. Spotlights at night are very effective because they ruin the night vision of the person looking into them. Enough light, and you can move around and not be easily seen. This is one thing Will is counting on since the way the strike team will get in is via the alley.

He also uses fire to block off the streets and route traffic away from the trouble area. A couple of ex-police officers who have reserve status also assist to secure the front and back.

With containment done, Will establishes the rules of engagement. What he’s saying is if the guy throws open the window and starts shooting, they can return fire. If he tries to escape, apprehend. The officers are instructed to fire only to prevent escape or if they’re being fired on.

Will is well into the next part of planning which is Admin and Logistics. He’s got people on the scene, and he’s clearly placed himself in command by instructing people what he wants done. He’s also well into the Communications plan. He instructs everyone to leave the CSP or Department channels and go to Sheriff’s Channel. This is  planning that had occurred years before. The different Sheriffs’ departments had set up a radio frequency for them to use to coordinate between each other. Will uses it to get traffic off the CSP and department traffic and to use this as it was meant to be used, as a tactical command channel.

But not all the pieces are assembled yet. Will needs a little more muscle to handle the takedown effectively, and if things goes sideways, he needs EMS. He calls in Marshals Pam Harmon and Bob Mortenson from the surrounding communities to assist. he also get’s EMS to be standing by.

Since the area in the alley behind several buildings is secure, that becomes the staging area. Additional assets and EMS will be there. One final piece of the equation is their equipment. In the book, The team has acquired an old MASH style ambulance that they name “The Hulk.” They’ve been turning into a command center of sorts, and it carries most of their gear to include helmets, rifles, ammo, and of all things Flak Jackets.

All this is brought in and staged behind the Fire trucks. When Pam and Bob arrive, they suit up, relieve Will and RJ who go suit up.

A quick word about flak jackets. Flak jackets ARE NOT bullet proof vests. Some tests have shown that they can sometimes defeat rounds like a 38 or 45, but that’s iffy at best. Will talks about that, and how the lowly 22 went right through in their tests. I researched out several sources that cited the results. All said that wearing a flak jacket was better than nothing, but nothing might be exactly what you’re wearing.

Once back, Will and Pam clear the first floor of the building. Despite assurances that there’s no motion down there (reserve officers can see through the windows), Will just wants to make sure the suspect isn’t hiding someplace were they can’t see.

Now comes the rest of the takedown.

Will first tries to talk the guy out. The man isn’t having any of that, and stays in his room. The next thing to do is to get some of the older residents out. It takes a few minutes to do that, but they evac them all.

One thing I don’t say in the book is that after a resident leaves, one of the officers would make a check of the room to ensure that no one else is in there, and that there isn’t a way for the suspect to be able to enter those rooms.

Once the evacuation is done, there’s still the problem of getting the shooter.

Will has a couple of options.

First, they can just wait him out. The problem with that is it would mean keeping all these assets in place. That means They have to go in after the guy.

Will wants to take him alive, but still minimize the chances of casualties to his team. They have to go in through the door, an area the suspect would no doubt have covered with his pistol. Since his team is wearing armor that offers about the same protection level as newspaper, Will wants the odds on his side.

A word about entering through the door. We have a lot of names for this area. Most call it the fatal funnel since it is a chokepoint. Others call it the Screwed Zone, and a few other words we won’t go into here. It’s enough to say it’s the most dangerous area of the assault.

Will decides to use teargas to even those odds. His plan is simple. RJ will use the rammer (a large heavy pipe with a flat end and with two handles for the officer to hang onto) to knock in the door.

He then gets out of the way as Bob comes up, and tosses in the teargas grenade.  They’ll give it a couple of seconds to fill the room before they come in. 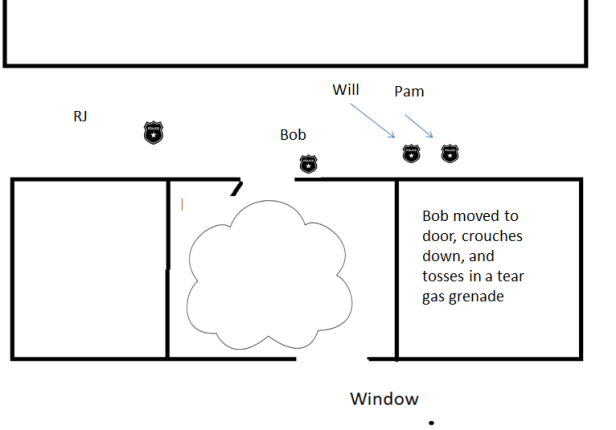 Will leads the way with Pam coming in almost right behind him. There’s a couple of things I should have mentioned in the book (Still might-it’s on Amazon and I can make changes at will).

First, the spotlights flooding the room might be a disadvantage. If the bad guy turned the lights off, he can be effectively hidden in the shadows. The other is our natural scan from right to left (I wonder if someone taught to read from left to right scans the other way?). In this case, the suspect is crouched behind the bed in the left hand corner of the room.

But Will’s planning had paid off. He’s effectively blinded by the gas and easy to disarm and take into custody.

One thing one reader was surprised that I noted was that Will called for fireman in masks to come up once the area was secure to put out any fires started by the tear gas grenade. Something rarely seen on TV or in books is that the grenades can get hot enough to set a house on fire. While that doesn’t happen here, it is a possibility in an actual assault, and often times is the result of the wrong kind of munitions used.

But next time, we discuss protective masks, gas grenades, and other factors when we continue our writers study of real tactical assaults.

Enjoy, stay safe, and stay healthy out there!