I was talking to a small class about writing (here I am, two books under my belt, and I’m already talking about as if it were a full-time career. Hey, dream big!), and the question came up, who influenced you as a writer?

It was a question I should have been ready for but wasn’t. I had to stop and think about it, so I believe the answer was an honest one.

There’s more than a few writers that would vie for first place.

A writer that always has, and still rocks my little world is Arthur C. Clarke. The first book written by this legendary author that I ever read was 2001: A Space Odyssey. It completely altered the way I looked at the universe and our place within it. His descriptions are so utterly rooted in the real world. I could easily imagine myself out among the rings and moons of Saturn, or aboard Discovery. I’ve read 2001 so many times that I’ve gone through a good twelve different copies of it, every one of them read until it fell apart. Discovering his other works just added to it all, and I list Earthlight and A Fall of Moondust as other favorites.

What I liked was he paid attention to reality. With very few exceptions, his science is first class, and I sometimes wish he’d given references for his research. He also has the heart of a poet, and he makes seeing what his protagonists see easy to visualize.

And since I like people who have done their homework, I have to list Tom Clancy down here. Once in a while, Tom can get a little wordy, but that doesn’t distract from what’s going on, or how something works. And he’s hard to beat for just plain old adventure.  His characters have a past, a present, and hopes for the future (in short, believable).

I also like that he realizes we don’t live in a perfect world. The endings aren’t always neat and tidy, and often messy as the characters wade through whatever mess they ’re in. I don’t mean this as a criticism. I’m just saying not everyone lives happily ever after. Don’t believe me, check out Debt of Honor. That’s a real mess for almost everyone involved.

Perhaps the thing I like Jack Ryan never once asked for things that have happened to him. he’s simply the right person, in the right place, at the right time. A fact that causes him an endless amount of grief. But rather than complain, he meets the challenges head on.

That just makes the next author on the list a bit an oddity. Edgar Rice Burroughs, the guy who created Tarzan. Tarzan has always been a part of my life. I remember watching the old Johnny Weissmuller movies as a kid. Of course, I had to wait for college to really discover him. I was wandering through the bookstore, and they had a rack of Burroughs on sale. A book called The Cave Girl caught my eye, not because of the contents, but the cover. I mean, really. A young man in college spots a book which sports a cover that has a hot young brunette in a fur bikini, holding a spear, and with two Sabertooth tigers on a leash! If that doesn’t fire a young man’s imagination, nothing ever will.

So, of course, I bought the book, wanting to learn more about this girl. Instead, I was treated to one serious adventure in a savage land where humans overcame with smarts, strength, and a never say die attitude.

And so I bought more. I read all the Tarzan novels, and all the John Carters, and even picked up stuff like The Rider and The Outlaw.

Burroughs taught me that sometimes adventure is just for the sake of that.  Your characters get tossed into a situation and have an extraordinary experience as a result.

If I have a complaint about Burroughs is we never really get into the characters’ heads. They’re either good or evil. A perfect example is the book The Land Time Forgot. In it, the captain of the submarine is just plain cold-blooded and rarely displays any humanity at all. In the movie (which I think is way overdue for a remake), he’s charming, educated, and smart enough to know that they need to set differences aside in the holy name of survival. Burroughs missed a huge chance to tell a story of enemies tossed together and forced to rely on each other and being changed as a result.

This final author doesn’t have that problem. Charles Russell is best known as a cowboy artist. Being a cowboy, I was surrounded by his work, and it surprised me to find out he was also a writer. In my opinion, his best work was a collection of short stories titled Trails Plowed Under. In it, we’re treated to a variety of characters who roamed the old west. It’s their actions that defines what they’re thinking, and on occasion what they say.  I’ve no complaint about the book save one, and I think it’s not so much a flaw, but one of the things that makes it so enjoyable. It’s written in some shorthand, hacksawed, westernized form of the English language. It uses words that if you heard them used in a conversation, you might ask “How do you spell that?” Despite that, the book is easily readable, and just plain fun. 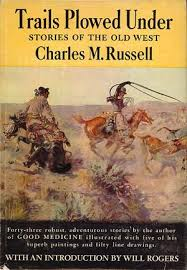 I felt it illustrated a fundamental thing a lot of writers forget. Write about your passion. Russell loved horses, the people he knew, and the land he roamed. He not only painted it, but preserved it in a written record by someone who had been there.

I guess you might say that Russell taught me to have fun while you’re writing something.

It is allowed you know.

So have fun with it.